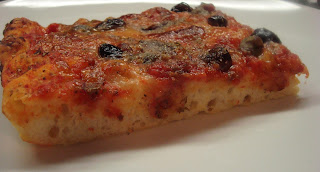 Pizza al taglio or pizza al trancio (Italian for pizza by the slice — literally "by the cut") is a variety of pizza baked in large rectangular trays, and generally sold in rectangular slices by weight, with prices marked per kilogram or per 100 grams. The simplest varieties include pizza Margherita (tomato sauce and cheese), pizza bianca (olive oil and salt), and pizza rossa (tomato sauce only). O
ther typical toppings include artichokes, asparagus, eggplant, ground meat and onions, potatoes, prosciutto, salami, sausage, ground truffles, zucchini, olive oil sundried tomatoes, rocket, gorgonzola, anchovies, and black olives. Most varieties are limited to a few toppings.
In the most traditional Italian pizza al taglio 'parlours' or outlets, the pizza is cooked in a wood-fire oven, although in today's establishments electric ovens are often used. The concept is similar to what is known as fast food in Western cultures. The main emphasis is not on the visual aspect of the pizza, it is more on the taste and convenience of the process. The rectangular pizza shape makes it easier to cut and divide the pizza to the buyer's desire, which is often distinguished by weight.
The pizza al taglio is a popular casual food in Italy and Malta, where for many years it has been a common way for people to grab a quick snack or meal. It has started to catch on in many other countries with differences in the styles of crusts, and toppings, suiting their own cultures.

Pasta is a type of noodle and is a staple food of traditional Italian cuisine, with the first reference dating to 1154. It is also commonly used to refer to the variety of pasta dishes. Typically pasta is made from an unleavened dough of a durum wheat flour mixed with water and formed into sheets or various shapes, then cooked and served in any number of dishes. It can be made with flour fro
m other cereals or grains, and eggs may be used instead of water. Pastas may be divided into two broad categories, dried (pasta secca) and fresh (pasta fresca). Chicken eggs frequently dominate as the source of the liquid component in fresh pasta.
Most dried pasta is commercially produced via an extrusion process. Fresh pasta was traditionally produced by hand, sometimes with the aid of simple machines, but today many varieties of fresh pasta are also commercially produced by large scale machines, and the products are broadly available in supermarkets.
Both dried and fresh pasta come in a number of shapes and varieties, with 310 specific forms known variably by over 1300 names having been recently documented. In Italy the names of specific pasta shapes or types often vary with locale. For example the form cavatelli is known by 28 different names depending on region and town. Common forms of pasta include long shapes, short shapes, tubes, flat shapes and sheets, miniature soup shapes, filled or stuffed, and specialty or decorative shapes.
As a category in Italian cuisine, both dried and fresh pastas are classically used in one of three kinds of prepared dishes. As pasta asciutta (or pastasciutta) cooked pasta is plated and served with a complementary sauce or condiment. A second classification of pasta dishes is pasta in brodo in which the pasta is part of a soup-type dish. A third category is pasta al forno in which the pasta incorporated into a dish that is subsequently baked.
Pasta is generally a simple dish, but comes in large varieties because it is a versatile food item. Some pasta dishes are served as a first course in Italy because the portion sizes are small and simple. The servings are usually accompanied by a side of meat. Pasta is also prepared in light lunches, such as salads or large portion sizes for dinner. It can be prepared by hand or food processor and served hot or cold. Pasta sauces vary in taste, color and texture. When choosing which type of pasta and sauce to serve together, there is a general rule that must be observed. Simple sauces like pesto are ideal for long and thin strands of pasta while tomato sauce combines well with thicker pastas. Thicker and chunkier sauces have the better ability to cling onto the holes and cuts of short, tubular, twisted pastas. Sauce should be served equally with its pasta. It is important that the sauce does not overflow the pasta. The extra sauce is left on the plate after all of the pasta is eaten. 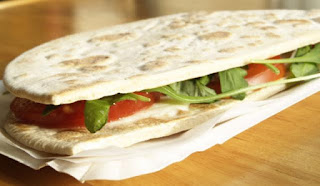 Piadina or Piada is a thin Italian flatbread, typically prepared in the Romagna region (Forlì-Cesena, Ravenna and Rimini). It is usually made with white flour, lard or olive oil, salt and water. The dough was traditionally cooked on a terracotta dish (called teggia in the Romagnolo dialect), although nowadays flat pans or electric griddles are commonly used.The Piadina has been added to the list of the traditional regional food products of Italy of the Emilia-Romagna Region. 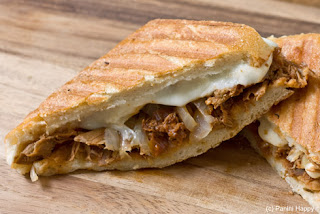 In Italy, panino (Italian pronunciation: [paˈniːno]) is the word for a sandwich made from bread other than sliced bread, in which case Italians call it a tramezzino or porco. Examples of bread types used are ciabatta, rosetta and baguette. The bread is cut horizontally and filled with deli ingredients such as salami, ham, cheese, mortadella, or other food, and sometimes served warm after having be
en pressed by a warming grill. A toasted sandwich made from sliced bread is not called "panino" but "toast" (pronounced as "tossed"), or "tosto" (pronounced "tossed-toe") by Italians, and is usually filled with ham and a few slices of cheese, and heated in sandwich press. A popular version of panino in Central Italy is filled with porchetta, slices of pork roasted with garlic, salt, rosemary, and sage.
In the United States, United Kingdom and Canada, the term panini has been adopted to refer to a pressed and toasted sandwich; there is widespread availability and use of sandwich presses, often known as "panini presses" or "toasted sandwich makers." 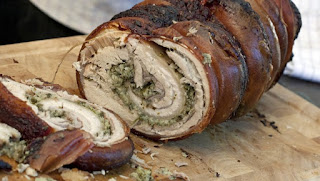 Porchetta [porˈketta] is a savoury, fatty, and moist boneless pork roast of Italian culinary tradition. The body of the pig is gutted, deboned, arranged carefully with layers of stuffing, meat, fat, and skin, then rolled, spitted, and roasted, traditionally over wood. Porchetta is usually heavily salted in addition to being stuffed with garlic, rosemary, fennel, or other herbs, often wild. Porchetta has been selected by the Italian Ministero delle Politiche Agricole, Alimentari e Forestali as a prodotto agroalimentare tradizionale (“traditional agricultural-alimentary product”, one of a list of traditional Italian foods held to have cultural relevance).